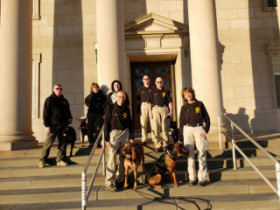 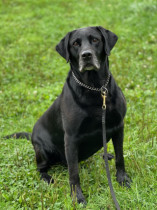 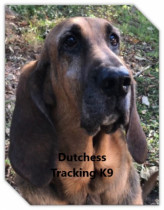 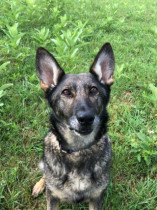 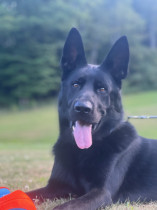 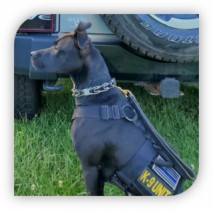 McKean County District Attorney Stephanie Vettenburg-Shaffer has expanded the K9 services of the McKean County Detectives’ Bureau operating out of the DA’s Office with the addition of more canines.  The canines assist law enforcement across the county in locating illegal narcotics, explosives and human remains as well as tracking individuals’ movements through scent.

Since 2011, Robert and Vicki Rinfrette and their canines have worked for the District Attorney’s Office and the McKean County Drug Task Force.  Robert has been in law enforcement for 43 years - 37 in the k9 field as a handler, trainer, examiner and certifier.  He is a certifying official for the National Narcotics Detector Dog Association.

Canine “LG” is a 7 year old Labrador retriever trained and certified for narcotics detection through two national associations. Canine “Nico” is a 2.5 year old German Shepherd imported from Czechoslovakia. She is trained and certified in explosive detection through a national association.  The newest addition to the K9 unit is narcotic-detecting K9 "Rigby."  Rigby was trained by Bob Rinfrette.  His handler is Officer Dakota Eaton.  LG, Nico and Rigby join the DA’s Office and Drug Task Force at various events across the county, most often geared toward children to teach children to say “no” to drugs.  The community may see the dogs at different events and they have participated in Kids’ Fest; Welcome Back events at the Smethport High School; LEAF day events; Fire/EMS Night in Mount Jewett; National Night Out in Kane; and the Black the Blue 5K event at Pitt Bradford. “LG” and "Rigby" have assisted law enforcement in searching for drugs at local schools and prisons.  “LG” and "Rigby" accompany District Attorney Stephanie Vettenburg-Shaffer at different events geared toward elementary school children and the two canines and “Nico” will be starring in their own coloring book warning children to stay away from drugs.  Recently, the DA and the K9 Unit of the County Detective Bureau created the "Support the Nose" campaign with T-shirts designed by Bob Rinfrette.  The "Support the Nose" campaign is an educational program wherein DA Vettenburg-Shaffer, the Chief County Detective Ryan Yingling, the K9s, Mr. and Mrs. Rinfrette and Officer Eaton go to schools or other community events to talk to children about the dangers of drugs and how to safely handle medication.

In 2019, the District Attorney's Office added dogs trained in search and rescue.  Rod Johnson has been training bloodhounds for 19 years and is an instructor for the National Police Bloodhound Association as well as Virginia Bloodhound Search and Rescue. Ruth Webb has been handling bloodhounds for five years and has two bloodhounds. Jay Prosser has been running backup for Rod for ten years has been a k9 handler for a year.  Jerry Prosser runs backup for Rod, Ruth, or Jay.  It takes hundreds of hours and thousands of dollars to train a dog.  “Reeba” is a trail dog owned by Johnson; “Izzy” is a cadaver and trail dog owned by Jay Prosser; and “Dixie” is a trail dog owned by Ruth Webb.  They have assisted law enforcement and search and rescue teams in McKean, Center, Elk, Potter, Tioga, and Warren counties.  They are certified by the American Working dog and the National Police Bloodhound Association.  Locally, they have found missing persons and tracked an arson suspect in Bradford Township.  These k9s have also been joining the District Attorney at events in the community including the Resource Fair at Pitt Bradford and the Back the Blue 5K event at Pitt Bradford.

In 2022, all 7 of the K9s represented the County Detective K9 Unit of the District Attorney's Office at the McKean County Fair.

These dogs are important to local law enforcement and the District Attorney as they all not only work in the field but also at events for community awareness and education.

If you would like a k9 at your event or school, please call the McKean County District Attorney’s Office at 887-3312.